Abandoned Florida: Sunshine Sentinels is a stunning visual survey of Florida’s historic coastal defenses – those sun-faded outposts of empire, crumbling now on shifting sands near the end of the beach. 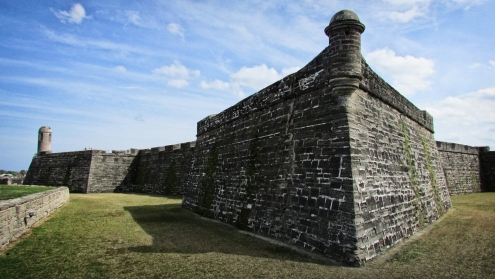 Castillo de San Marcos’s walls are composed of 400,000 hand-cut blocks of coquina, a porous, sedimentary stone that compresses upon impact, giving the fort a remarkable resilience to cannon fire. This coquina was once covered by a neat layer of red and white plaster.

Between 1842 and 1844, the Americans filled the fourth side of the moat in order to construct a water battery. This addition provided an extra layer of defense from heavy guns mounted aboard enemy ships, as well as a firing position for larger caliber American guns developed during the nineteenth century.

At the time of its construction, the power plant (1919) was near the center of the Egmont Key. Steady currents and intermittent storms are sweeping Egmont Key off the map. To the south, two of the fort’s batteries—Burchsted and Page—have already slipped beneath the lukewarm and indifferent waves of the Gulf.

Since the main fire control tower could not provide adequate visual coverage over the shipping channel—where Battery Mellon’s field of fire was concentrated—a second, dedicated control tower was built on the north end of the Egmont Key 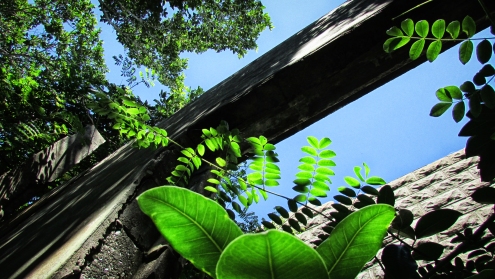 These hulking structures—the cable tank and mine storehouses (1908)—once supplemented the mining operation at the north end of Egmont Key. In the event of actual deployment, the mines would be armed, controlled, and detonated from a concrete-reinforced casemate buried nearby.

Visitors to the Dry Tortugas arrive by ferry, seaplane, or private vessel. Two of these sightseers stand atop the northwest bastion of Fort Jefferson (1846), fifty feet above the Gulf of Mexico on the fort’s open upper level, known as the barbette tier.

The open casemates of Fort Jefferson’s northeastern wall recede into the afternoon sunlight. Each archway delineates a distinct firing position. Had an enemy ship ever approached—and had the fort ever been armed to its full potential—this design would have allowed 125 guns to zero on any given target all at once. 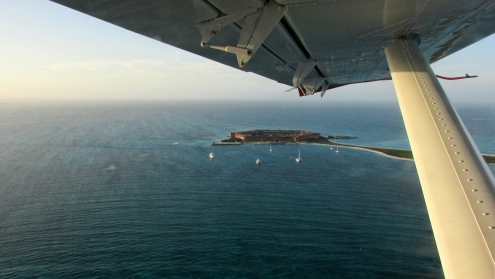 From the window of a DHC-3 Otter seaplane, Fort Jefferson seems to inhabit the exact middle of nowhere. In actuality, it commands a 75-mile-wide strait linking the Gulf and the Atlantic Ocean. Scores of shipwrecks dot the reefs and the vast shallows on either side of the strait. 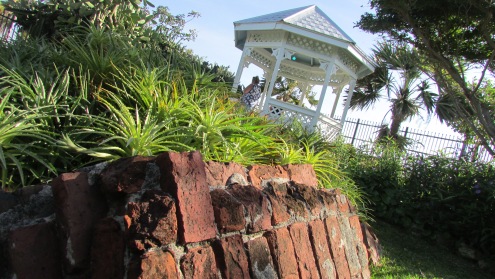 A modern gazebo stands amidst the meticulously manicured ruins of the West Martello Tower, home of the Key West Garden Club since 1955. It is the clearest manifestation of the fort’s transformation from implement of war into a monument for peace and harmony.

During the Endicott Period, the casemates of Fort Pickens were retrofitted to support a submerged mine system that could seal Pensacola Pass on short notice. Such systems became integral to coastal defense during the era of ironclads and armored cruisers.

Under Spanish rule, the Castillo de San Marcos became a beacon of hope for Africans enslaved by the English. If these runaways could successfully make their way south to Florida, they would be welcomed in either St. Augustine proper or, later, at nearby Fort Mose, the first free black settlement in the future United States.

A relic of heightened thermonuclear tensions, this Nike-Hercules missile sits on display in one of the three barns at HM-69 in Everglades National Park. Armed and fueled, the 41-foot-long missile weighed 11,000 pounds and represented the U.S.’s last line of defense against nuclear attack from the south.

Discover the past and present of conquest and defense in the Sunshine State, documented in 140 images of gritty ruin and glorious restoration – ranging from the coquina confines of Castillo de San Marcos in St. Augustine to the towering casemates of far-flung Fort Jefferson in the Dry Tortugas; from the shattered hulk of Fort Pickens in Pensacola to the cracked concrete batteries of Fort Dade in Tampa Bay; from the carefree garden spot of West Martello Tower in Key West to the paranoiac isolation of nuclear-powered HM-69 Nike Missile Base deep in the Everglades.

Author Thomas Kenning delivers a vivid account of Florida’s past that spans centuries, deftly blending history and urban exploration on a guided tour through Florida’s many moments in the sun – from Spanish foothold to Indian removal, Civil War blockade to Cold War flashpoint.